A reminder of a very black day in my childhood

This topic of desks from Odd #8 and Odd #9, unlike my Best-Ever Christmas, reminds me of a very black day in my childhood.

My father’s desk was an ancient secretary from the 1700s, borrowed from Grandpa for a few years. It was quite tall, with hand-blown glass in the doors covering the top half’s bookshelves and solid wood doors covering the bottom half’s shelves. Its most wondrous feature (to my childish eyes) was the clever fall-front door in the middle which, when opened and supported by slides, became a desktop and revealed tantalizingly mysterious pigeonholes in the back.

The surface of the fall-front desktop was completely covered with inky numbers from generations of my frugal ancestors’ careful figuring. The pigeonholes were filled with my father’s desk accoutrements, like my hole punch and stapler except that he had a whole lot more. I used to tuck myself under that fall-front desktop and read a book right at his feet, absent-mindedly paying attention to his mutterings and self-talk, while he reconciled accounts and recorded crucial farm production figures.

It was during one of these cozy father-daughter experiences that I discovered the wealth being tossed into his wastebasket by my very own father. I was disappointed. Oh, let’s be honest: it went way beyond disappointment. I was shocked. Such heavy, high-quality paper being thrown away – with one side completely blank!

By this time I’d just finished second grade, with fearsome Mrs. Logan at the helm – not someone I cared to cross. While Mrs. Logan was not only downright scary, even worse in my humble opinion was the fact that she was decidedly lacking in her knowledge of fashion and hair design. But I’ll say this for the old bat: she was stupendously ahead of her time in one arena.

By the end of the school term, she had whipped us all into shape when it came to PAPER. Few things could arouse her wrath more quickly than tossing a homework sheet with only one side used into the trash. Decades before the term recycling took on its current, politically correct meaning, she had drilled into my developing brain that one should NEVER place a piece of paper in the trash until BOTH sides were covered with #2 pencil smudgings. NEVER.

Though I didn’t much like her, I certainly did respect Mrs. Logan. And now here was someone I respected, liked, and loved showing an appalling lack of conservation.

It got worse, the deeper I dug. Everyone knows an envelope is way more expensive than a sheet of paper, and my father was throwing away tons of them. (Never mind that they were all self-addressed to unknown-to-me corporations.)

It got even worse.

Well, let me tell you I won’t soon forget The Black Day I found the carbon paper! Think Norman Rockwell’s gangly, wide-eyed boy with a Santa costume dangling from his hands in front of his parents’ open bureau drawer. Yes. THAT kind of astonishment. Even as an nine-year-old, I knew carbon paper was something special. I knew because you couldn’t just saunter into any old Woolworth’s Five & Dime and buy wads of it. I had, after all, accompanied my father to the stationery store solely to buy crisp, thin packets of carbon paper.

But what really hurt was that MY father – the one with frugal Scottish blood running thick and deep in his veins – was wantonly throwing it away. Even if it was just a sheet or two here and there from government forms, the ramifications were still staggering. Each precious sheet had only a few markings on it from whatever form it must’ve accompanied. That left plenty of carbon-y real estate for anyone writing something important enough that it needed to be repeated in duplicate, as I no doubt would be.

Truth is a funny thing. We think we want to know it, but sometimes what we accept as truth comes with itchy and uncomfortable revelations, à la my father’s disturbing penchant for throwing away perfectly good stationery – with both hands.

I truly was wounded when I discovered a seeming contradiction between my father’s values and his behavior. Of course, “seeming” is the operative word here, isn’t it? As a freshly minted nine-year-old, I didn’t know about some things (ID concerns and privacy) and why stuffing discarded mail in one’s own trash was the safest route to follow. (At least it was back then. Now, not so much.)

I didn’t have all the facts. And isn’t that usually the case? Most of us are playing with less than a full hand when it comes to knowing why those around us behave as they do. They may, like my father, have perfectly rational reasons for their behavior. We just don’t happen to know what they are.

While I believe the Bible is inspired truth, I also believe that what we as mere men and women surmise to be Truth is very often overly influenced by our limited perspective.

Disclaimer: this is a pay-attention lesson I hope to learn by the time I die, because it’s looking more and more doubtful that it’ll happen much before then. I’m way past nine, but I’m still jumping to conclusions. Some of us are just slow learners. But some of us are just plain stubborn, hanging onto old habits when we know better. (I’ll leave it to you to decide into which category I fall.)

The oven timer just rang for Odd #11. In it, you’ll learn how a nine-year-old business prodigy started an entire corporation with the refuse “wantonly” and “carelessly” tossed out by someone not quite so creative. 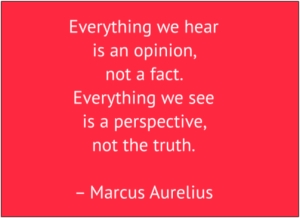 My nine-year old perspective was wonky.