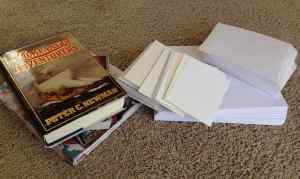 Do you get a high from:

YES! I admit I get a fix from all these paper sources and many more too tedious to list.

So you can see it wasn’t just odd frugality, odd bookwormishness, an odd entrepreneurial nose for profit, or even the innate bent for taking pencil to paper that led to my summer Spirea Bush & Associates “office.” No, it was something far less lofty; it was the simple smell of paper. Now if that isn’t odd, then I don’t know what is.

During my early years, I could get a fix by simply walking by my father’s desk. Since this was before The Best-Ever Christmas and my membership in The Society of Desk Owners, I had no way of knowing that I would be able to get a fix from my very own desk. That ninth summer, I got it from my Spirea Bush & Associates office. But my perennially favorite treasure trove of paper smells came from Grandpa’s desk, which emitted a rich potpourri of paper perfumes – all calling my name.

Grandpa was a modest man with a knack for making exorbitant sums of money and looking like a hayseed as he did it. His unassuming desk was a petite, mahogany, lady’s desk, if you can imagine. (Grandpa was neither petite nor female, just so you know.) A miniscule two feet by four feet, it was always stacked high with shaky piles of opened mail, letters needing replies, farm magazines, church newsletters from all over the world, seed and fertilizer catalogs, and a few (usually empty) file folders.

Here’s the really odd thing: that unlikely little desk was witness to millions of dollars (in 1950s and 1960s money!) of financial transactions. As a quite tidy child, though, I had no way of knowing this and I used to wonder, rather indignantly, how he could find anything in that mess.

I knew, though, that touching a single piece of paper on his desk was just about as ditzy as shouting out, “Would some grownup around here like to switch my bare little legs?” For forty-some years, clean-and-tidy Grandma had tried to tidy it up and received you-know-what for her efforts. Little could rile Grandpa more than someone messing with his organizational “system.”

After watching this drama play out over the years, I was content merely to snoop and sniff, hands clasped prudently behind my back. If he’d left his desk’s sole file drawer open, that was indeed a fragrant bonus. I just bent a little lower and inhaled deeply, hands still clasped behind my back.

So you see, my parents had plenty of reasons to know that their daughter needed her own desk. I’ll cut them some slack and assume that, distracted by their adult responsibilities, they were too busy to pay attention to all this paper-addiction oddity. But apparently, sometime between my very early years and The Best-Ever Christmas, they started paying attention to this characteristically odd behavior. Recognizing and accepting their daughter’s true inclinations (no matter how odd), they finally gave up on the whole nurturing-mother-doll-thing in favor of a desk and the aromatic paper goods that should accompany a desk. (Yum.)

It’s a wonder it took them as long as it did, now that I think about it. Would it take you eight long years if you knew a little girl who:

You see my point? Though my parents did eventually arrive at the party, it took them eight years to recognize the supreme oddity of all the above and the type of gift appropriate for such extraordinary oddity.

Are there some pay-attention points
to all this childhood reminiscing
and parent-bashing?

Of course, and here they are.

Now let’s talk about YOU.

What’s the in-your-face oddity of those close to you that you need to pay attention to and encourage? Do it. You might be the only one in their lives paying attention and willing to endorse a languishing and very odd penchant for _______ , which could turn out to be the very impetus they need to do something really spectacular with that oddity. (And just think how cool it’ll be to say someday to one and all, “You know, I helped her discover her talent for _____.”)

Okay, you know how I’ve said the whole purpose for this Odd Series is to demonstrate that even those of us who are odd-beyond-belief can stumble upon pay-attention tips that are quite helpful for the more “normal” amongst us?

Well let’s just pretend that you have a little oddity. No panic: I’m not saying you do. I’m just saying what if you do? If you do, then maybe you need to pay attention to your own little oddity, cultivate it, and turn it into a benefit for yourself and others. I’m just sayin’. As unwelcome a thought as it may be, it is possible you have some oddities, too, you know. (If it feels less threatening to call them idiosyncrasies then, by all means, use that semantic workaround.) 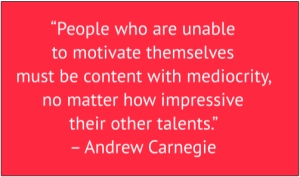 Oddity & mediocrity are seldom seen together.

In Odd #13, ready for your enjoyment, you’ll see how another bit of oddity led to my smoke-em-if-you-got-em mentality. (FYI: it has nothing to do with cigarettes or marijuana and everything to do with using your straight-from-the-birth-canal talents, regardless of how odd they may be.)