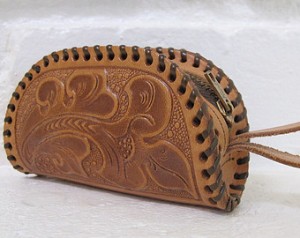 I didn’t know how to do this. Didn’t matter.

After seven years of honing my QC skills around our farm and farmhouse, I got my first real chance to show the rest of the world just how it’s done. At the ripe age of 14, I signed up to “judge” crafts at our local 4-H fair. Winning at the local level, I went on to district and then to state, where I won first place.

First place in what, you ask? Why, leather tooling, of course. Small matter that I had never so much as tooled a pocket-sized coin purse, let alone something substantial like, oh, say, a book cover or a chair seat. I didn’t need to since, as you already know, I possessed the innate talent of quality control.

Just to be on the safe side, though, Mother took me to the northernmost edge of our county for two hours of tutelage from a 4-H leader who was an expert leather tooler. Bidding me to pay close attention, she gamely showed me the tools, demonstrated their use, and gave me a leather tooling booklet to read. Having done as she was asked, she sent me on my way, clearly certain of my failure.

Ha! When you’re
a born quality control inspector,
finding the flaws
in others’ work is easy-peasy.

I let her cynicism roll right off. Drawing from my 14-year-old well of wisdom, I knew that not having done something with your own two hands had nothing to do with your ability to judge when that skill has been correctly applied. My father, it turned out, did not agree.

When I came home with blue ribbons hanging off my chest and a big grin on my face, my father – usually my biggest fan – was not his usual supportive self. I caught him quizzing my mother about the whole event, growing increasingly exasperated. From their whispered conversations, I learned he thought some of the “youngsters” who’d actually done leather tooling deserved to win. What that had to do with it, I could not fathom. He even went so far as to commiserate with the poor children: “Tsk, tsk, how disappointed they must be,” etc., etc. Such a mutiny from my biggest fan diminished some of the shine on my shiny blue ribbons – but not much, since my quantity of pride more than compensated for his lack of same.

For several years thereafter, when a conversation turned to “what the experts say,” my Father turned surly. Oh let’s just say it: he exhibited an uncharacteristic, most unflattering, grousing streak. His opinion of “experts” had definitely changed – and not for the better.

We parted company on this topic for most of my youth. I figured if you have a QC talent, you should use it. If you win some honors and are designated “an expert” because of it, so much the better. The poor people who had to do something before they could be an accurate judge of it were just slow learners in my book, and I didn’t feel a bit sorry for them.

By the time he told me the story about my appraisal of his remodeling skills (in Odd #13), he’d found his equilibrium and could laugh about it and this little 4-H story, as well. I had, however, lost mine by then and it took a few more years before I, too, could see the humor.

Is there a pay-attention point to all this jaded carping?

Of course!
Pay close attention,
as it’s a thorny one.

My QC skills, like most natural talents, needed some tactful polishing before being let loose on an innocent public. As an obnoxiously overconfident fourteen-year-old, I had yet to learn this. Hoo boy; now THAT’s an understatement.

So while you’re encouraging those young people around you to deploy their natural talents, it’s advantageous for all concerned if you also do a ra-ra-ree cheerleading routine for that perennial winner, Tact.

Pay attention: you don’t want your pep talks to create an unrealistic “I’m-soooooo-clever” attitude, do you? Any talent unmodified by tact – at the very minimum – turns into a dicey dilemma for most of the parties involved, as you’ve just read. Sometimes it moves well beyond dicey: it starts internecine wars. 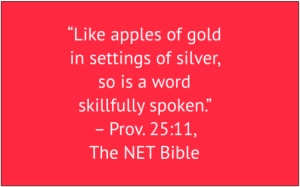 This applies to QC and everything else!

Okay, we’re done with that.

Had enough schadenfreude? (I LOVE it when I can find a legitimate use for this German tongue twister.) How about we take a break from these ODD blog posts? I’m sure you’re getting just as tired of them as I am. Besides, they’ve become a good deal more embarrassing than I surmised (see above!). Let’s switch to pay-attention truths that we can learn from stories involving way less of my oddity – preferably none at all, at least for the time being.

I’ve almost finished gussying up the next blog post. Here’s the tease: it’s about cute little girls (those darlings of the ad world) and titled Letting Go. (If you haven’t already, click the “+ Follow” button at bottom right to be notified when it’s published.)