Judging a Book by the Cover, Part 2 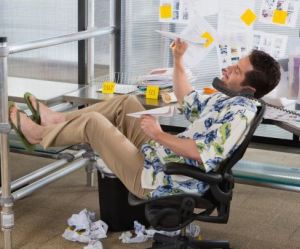 Not very concerned about his cover, is he?

Have you ever noticed how it’s okay for you to do something that’s not quite fair, but not for others to do the exact same thing? When they do it, it’s “grossly unfair.” When you do it, not so much. That’s the another conundrum of life: the dual standards we often hold for ourselves and others.

You know where I’m headed with this. It’s where Mom probably went. It’s the part in the drama where you played the It’s Not Fair card.

Pay attention:
you were both right.

Mom was right because other people are just as lazy as we are. They judge a book by the cover because they don’t want to take the time or make the effort to insure a more accurate first impression. They claim what you and I claim: “Looks are all I have to go on.”

You were right because if looks are all we routinely use to evaluate people and things, we’re being extremely unfair and supremely superficial.

Here’s what Mom was trying to say. A whole lot of life is unfair but – pay attention – sometimes we have the ability to make life a little more fair. When we have that chance, we should take it.

When that prospective employer looks you over in a 20-minute interview, he’s trying to cover a whole lot of ground. Maybe he’s an expert in culling details and clues. Maybe he’s like Malcolm Gladwell’s experts – an accomplished thin-slicer. Maybe not. Maybe he’s lazy. Maybe he’ll notice only that you’re dressed like a slob and figure your resumé and references are equally slobby, giving them only a cursory look. He won’t be fair.

If he calls you back for a second interview, you may get the chance to wow him with your expertise and rapier-like mind. But honestly, you know and I know that if he isn’t impressed by the “cover” in the first 20 minutes, he won’t be fair enough to give you a second 20 minutes to show him what’s inside your “book.”

You do the same thing – to yourself. You judge you based on how your cover looks as you pass the mirror. When what you see in the mirror is hat-hair, makeup-less face, ragged t-shirt, and baggy PJ pants, how do you judge yourself? As a snappy, on-top-of-it professional?

I don’t think so. I rather think you see yourself as a slob and start berating yourself. When we slip into negative self-talking, seldom does good come of it. It seldom motivates us to start acting appropriately or professionally. Mostly, we just keep on acting the part of a slob – because we look like a slob.

Okay, the unfair reality is that we and others default to judging a book by the cover – even our own “books.” But there is something we can we do to stop others from forming erroneous first impressions of us.

Pay attention.
We can make
our “cover” match our “book.”
Now, there’s an idea. 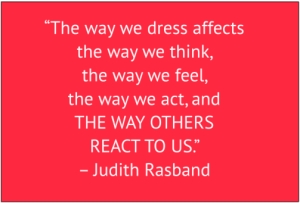 From “America’s Image Expert” (caps mine)

3 Comments to “Judging a Book by the Cover, Part 2”