(Should be brown paper. You’ll see why.)

You know how we sometimes have to take a break from stuff that’s disturbingly awkward, stock up on courage, and then hit the awkward stuff again?

After 14 blog posts about my extreme oddity, I gave Oddity a rest. (I’d gone way past the comfort zone on the Embarrass-O-Meter.) It’s been eight months – enough time for some vigorous hide-toughening – as I begin another round of blog posts exposing my heartbreaking oddity in order to reveal pay-attention lessons that even a “normal” person (like you) can use.

In the 1940s and 1950s, farmers – even ones who went to church regularly – didn’t need many suits. During my very early years, my farmer-father had four: two light-colored, summer-weight wool ones and two dark, heavy-weight wool ones for winter. (Wool, you’ll remember, can be aired out, not requiring dry-cleaning for long periods of time.)

He was tall and slender and when he donned a crisp, white shirt that my mother had painstakingly ironed (long before the days of permanent press and poly-cotton blends) and covered it with one of his suits, he was quite handsome. In fact, I always fancied he looked a lot like Gregory Peck, with Jimmie Stewart’s self-deprecating posture and mannerisms thrown in for good measure.

In the spring and fall, I waited for The Semi-Annual Suit Week. Since there were only two per year, there was plenty of time for the anticipation to build. Mother, knowing me to be impatient, as well as odd, usually didn’t tell me when the first of the week-long wait began. My father would simply return from running errands one day and, voila, The Special Day had arrived. He had just picked up the previous season’s suits – freshly dry-cleaned and pressed. Here’s the important part: each suit always arrived in a pristine, crisp, two-foot by four-foot, brown-paper bag. Ah, paper.

No, it isn’t your imagination. Yes, we are, indeed, back to the bizarre paper fetish mentioned in Odd #12.

This was just before the unfortunate time in advertising history when businesses uniformly decided to plaster their names all over anything that didn’t move and eons before their current practice of plastering their names all over everything that does move. When I say pristine, I mean PRISTINE. Those brown paper dry-cleaner bags were completely ink-free, without so much as a phone number on them.

Painfully aware of my paper fetish, my father knew better than to let those precious bags get mussed in transit from the cleaners to our farmhouse. His odd little girl would be most disappointed with a crinkled and wrinkled dry-cleaner bag. Those bags were taller than I and so, yielded more coloring real estate than I could ever get my hands on at any other time. (There were no craft stores with huge rolls of colored craft paper in unlimited footage in those days. At least, not in our little corner of rural Indiana.)

One year, I decided to blow my budget and use one entire side of a bag for having Mother trace around my body. I wanted to get a factual perspective on how big I was – or wasn’t, as it turned out. It was a painful, in-my-face way to learn why I’d been named Runt of the Sinclair Clan.

If you experienced childhood any time after the 1950s, you may well be thinking we were pitifully poor. We weren’t. My father didn’t have to save that paper bag for me to color. As Odd #8 makes abundantly clear, he could well afford to buy all kinds of paper – and a desk in which to store them!

The wanton discarding of such virgin bounty was simply not in our genes. Even if they’d had no odd daughter with a paper fetish, my parents would’ve saved the paper. They were both descended from multiple lines of Scottish immigrants from the late 1600s and early 1700s, who became Yankee stock before moving west. You know – the folks who brought us the maxim, “Use it up, wear it out, make it do, or do without”?

Incidentally, that maxim – regardless of the politically correct recycling craze – doesn’t play well in The Colonies these days. Oh, we cheerily give a cursory rinsing to stuff and pitch it in the city-provided and city-collected recycling bin. We pay abundant lip-service to reusing stuff, but if it involves our personal time and energy to deconstruct something and use it in a completely different way, well, we “don’t have time.” When it comes right down to it, we’re almost as profligate with resources as preceding generations.

But I digress. Back to the story. Even today, when I see a large and empty piece of paper, I remember those dry-cleaner bags and begin concocting – with practically no effort – a half-dozen ways to use it. And if anyone will listen, I’m happy to tell them all the magical ways it could be reused. Of course, few want to be seen listening to someone so odd. Don’t care. Neither should you.

Oh my goodness!
Will she EVER get
to the pay-attention point?

Obviously, there’s the recycling pay-attention point to this good-old-days story, but I’ve harped on that plenty in previous blogs. Nothing new there.

PAY ATTENTION! Here’s the deeper pay-attention point: cultivate your ability to find delight in the SIMPLEST of items, especially those others thoughtlessly and foolishly discard. Those crisp, pristine, brown paper bags (that any other father would’ve tossed) were:

No, it isn’t your imagination. Yes, we are back to that recurring gratitude theme. It just won’t go away, as that’s what most religions and the aged among us recognize to be the platform of a life well lived. 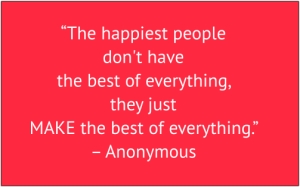